Now that winter has (finally) arrived – it provides a new “medium” for pictures.  This is sample from our evening walk. Our dog was very excited to see the freshly fallen snow! 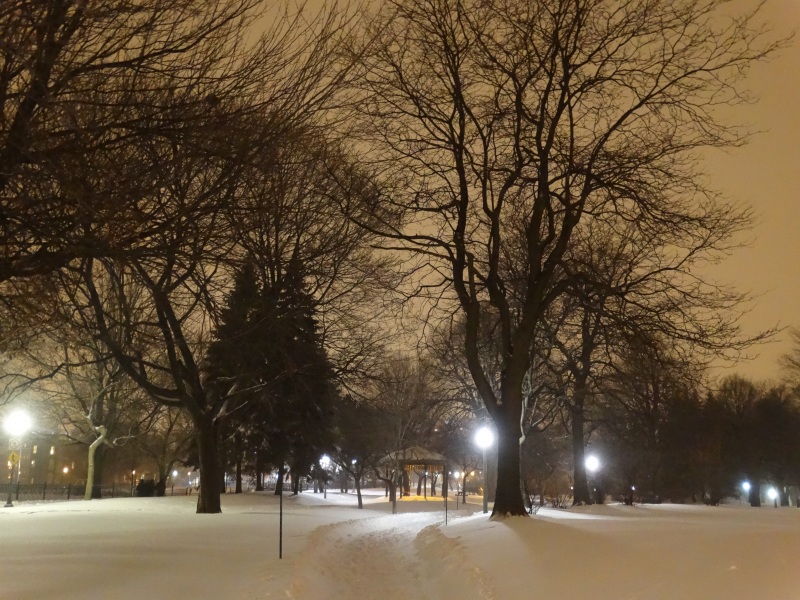 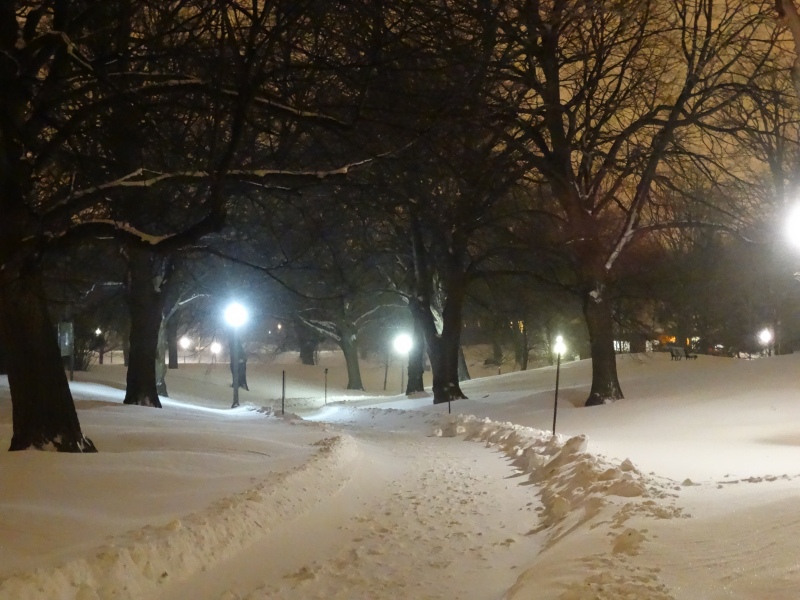 A version of this article appeared in Westmount Magazine 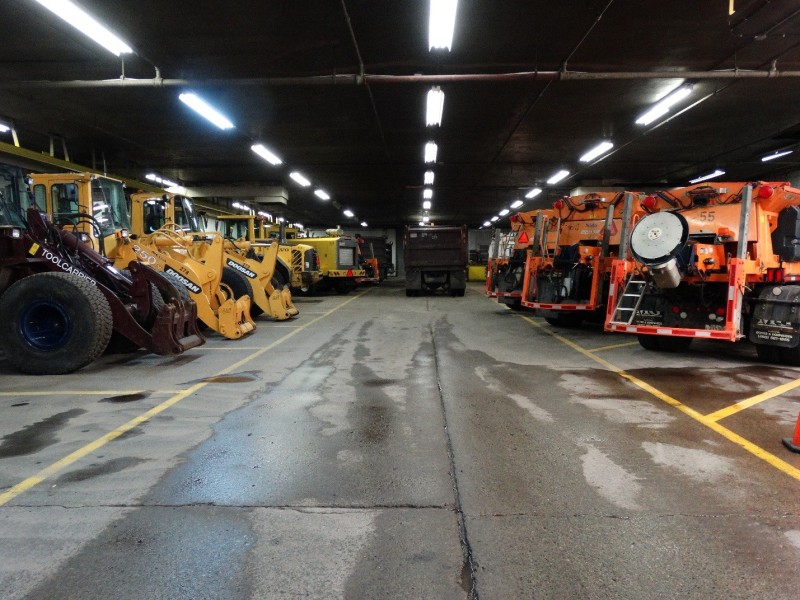 For a change of pace, over the weekends, we sometimes walk our dog under the embankment at Bethune towards the city’s Corporation Yards. This is an area that contains various public recycling depots (including electronics) that were initially installed in 1987 before the city’s apartment buildings were equipped with recycling facilities.

Without exception, our arrival elicits a response by a Public Work’s employee if we appear to be approaching the yard’s gate barriers. I began to wonder, within in this area of controlled access, what is behind those barriers and inside the sheds.  Specifically, what services comprise the yards? I am certain that a large proportion of the city’s population as not even aware of their existence.  My main problem, however, was finding a means to obtain permission to visit this area.

“They will never let you inside – I have heard they are storing a crashed flying saucer in one of their sheds!” These were the comments from a colleague at our office (who lives in Notre-Dame-de-Grâce) when I mentioned the idea of doing a piece on the Corporation Yards.

Undeterred, I sent a query using a form on the city’s website. A few days later, I was on the phone with Patrick Raggo, Director of Public Works, and pitching my idea of doing an exposé about his department. 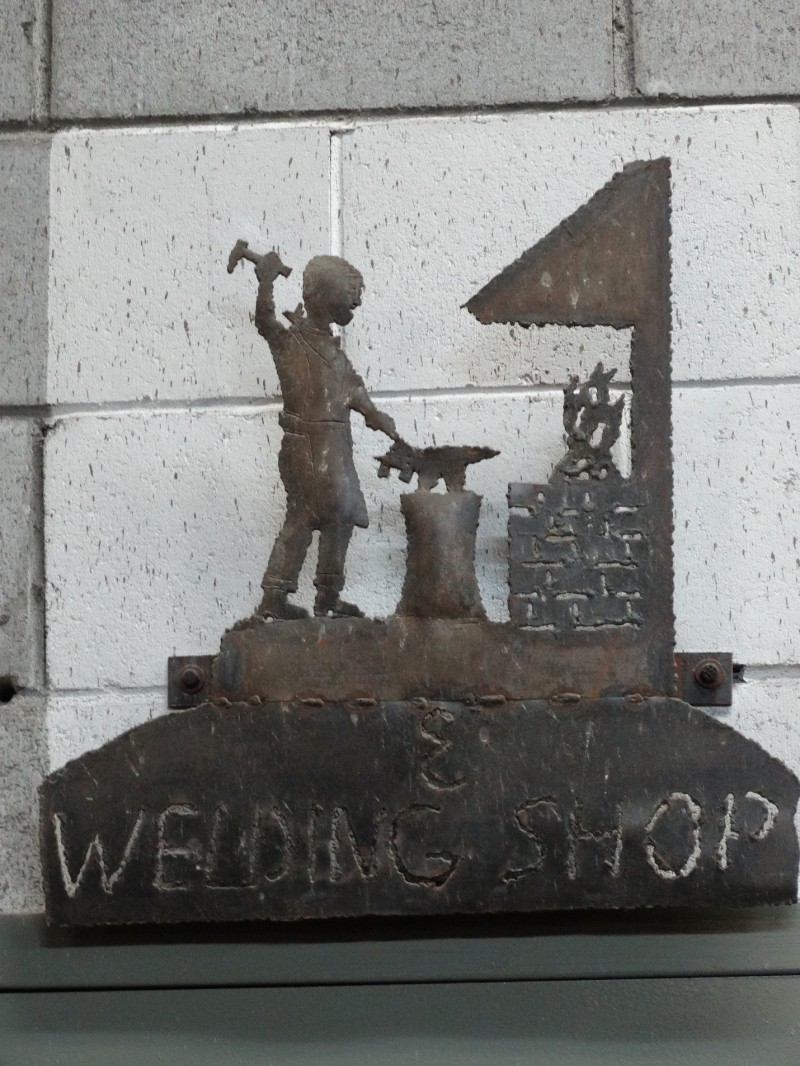 Due to safety issues, it took a few days to obtain the various levels of permissions before I was granted access. On a cloudy Friday afternoon, I was teamed up with Peter Giambattisto (the city’s Graphical Information Systems technician) and was treated to a fascinating tour.

The Corporation Yards were constructed in 1909 on a strip of land between the Trans-Canada Highway and Canadian Pacific Railway’s tracks.   In the past, the yards contained a horse stable (demolished in the mid-1950s), shoeing and black-smith shops as well as a snow-melting plant that would discharge its contents under the adjacent highway.

It also contained two residences for the city’s superintendents: one for parks and the other for roads.

In 1953 a Nicholas Monohearth incinerator, with a 115 foot chimney, was installed as the city’s “municipal refuse destructor”.   In 1963, the chimney was equipped with a “wet scrubber” that minimized the emission of ashes.  No longer in use, the chimney has been demolished; however, the (condemned) incinerator building is still standing.

While walking through the yards, I noticed many closed circuit television cameras – in the past their function was provided by a staff of watchmen. 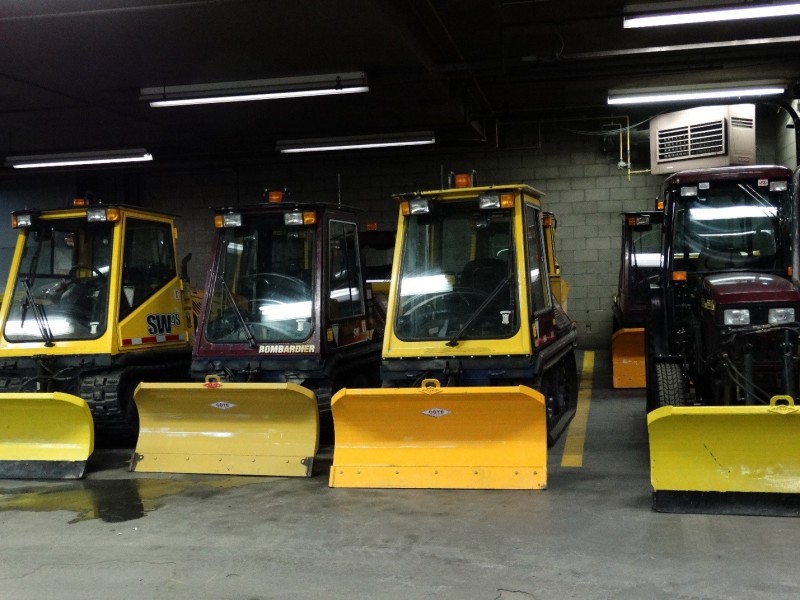 The area is currently home to about 125 city employees that include: Hydro Westmount (blue-collars), Information Technologies, Garage and Purchasing.

The “Office and Stores Building” – contains supplies that include everything from screws to leather welding jackets.

Several of the buildings are used as municipal garages that are fully equipped to perform mechanical repairs. The area is has a fuel management system that includes several pumps and underground gasoline tanks.

In addition, there is a paint and sign shop, a welding shop and areas where refuse from the parks are unloaded.   Did you miss this week’s garbage collection?  There is a place at the yards for that as well.  There is also an area containing asphalt that is used as temporary road fill during the winter season.

There are two large shelters that contain sand and rock salt (mixed with calcium chloride) that are used on the city’s streets as a winter abrasives.

Following this tour, I became more aware of what is required to service this city and, as such, makes living in Westmount such a pleasure.

As for the location of the crashed flying saucer – the jury is still out on that one!

I would like to sincerely thank Peter Giambattisto, Patrick Raggo and Ena Gucciardi, from Public Works Department, for arranging this visit of the Corporation Yards.

A balmy Christmas morning coupled with a beautiful sunrise. 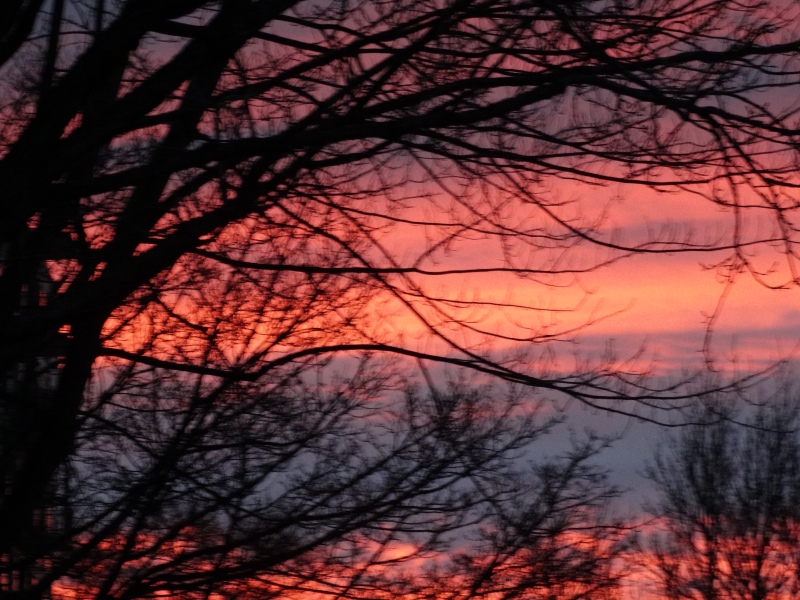 A perfect backdrop, over Westmount Park, for Santa’s sleigh! 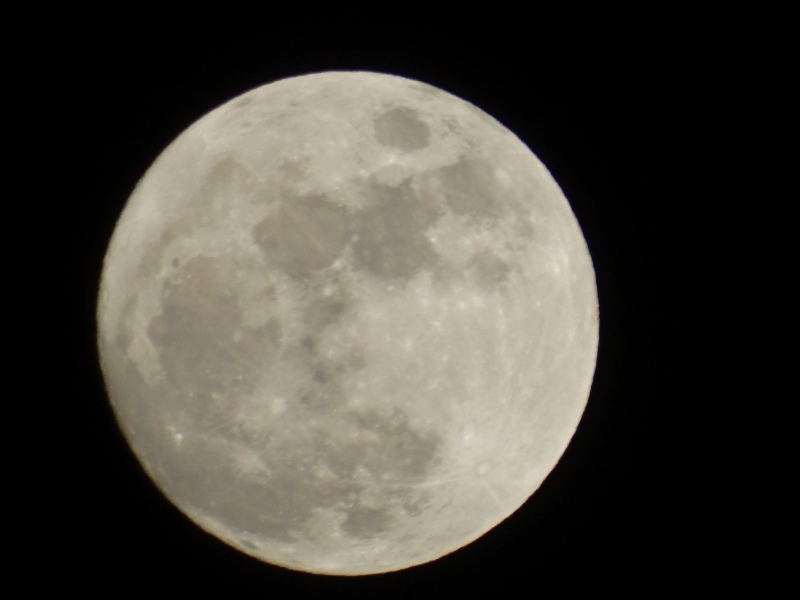 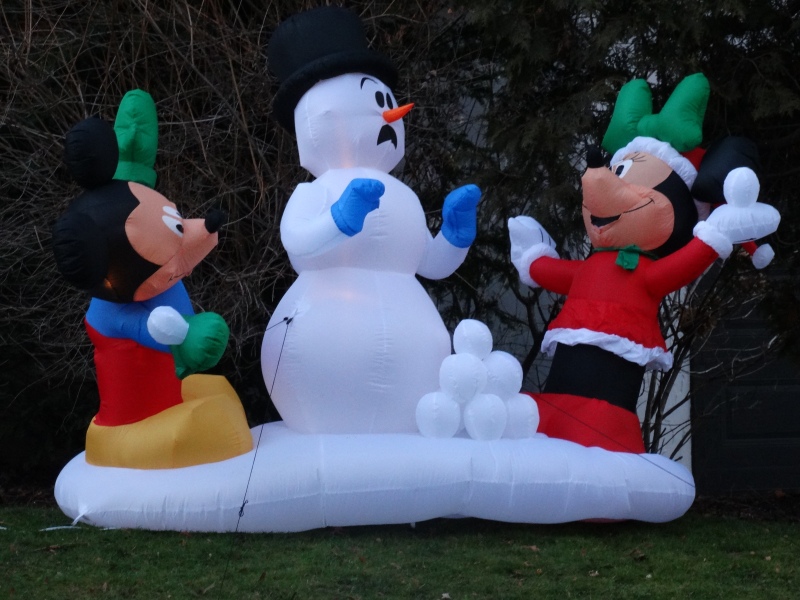 One of my favourite memories, as a child, was looking at store windows during the Christmas season. With our noses pressed on their glass fronts – we were transported into another word!

Today, these decorated store fronts are the exception rather than the rule.  There are however; several on Westmount’s “High Street” that try to “make an effort” – these are the ones we noticed this Christmas Eve: 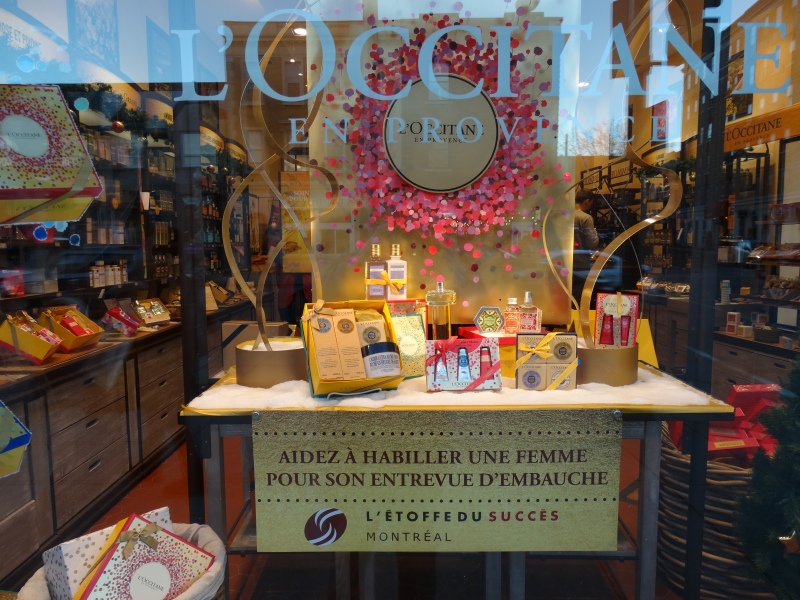 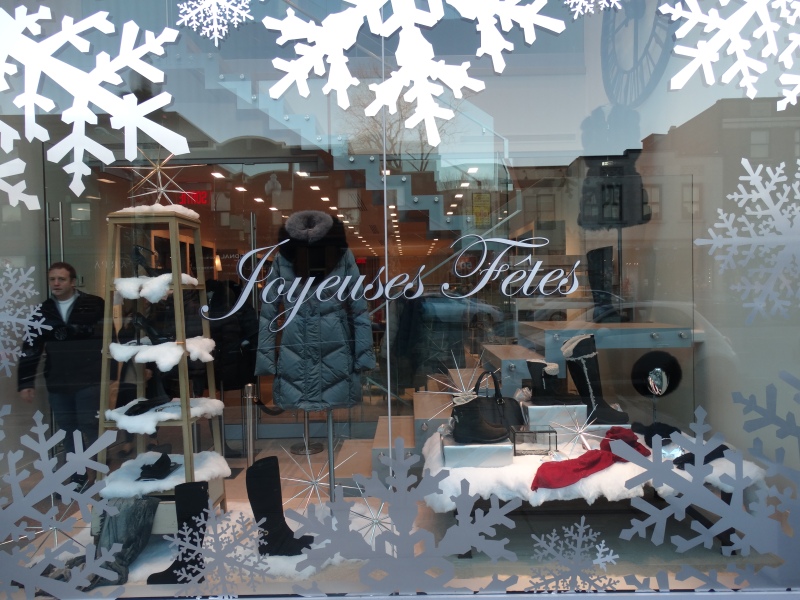 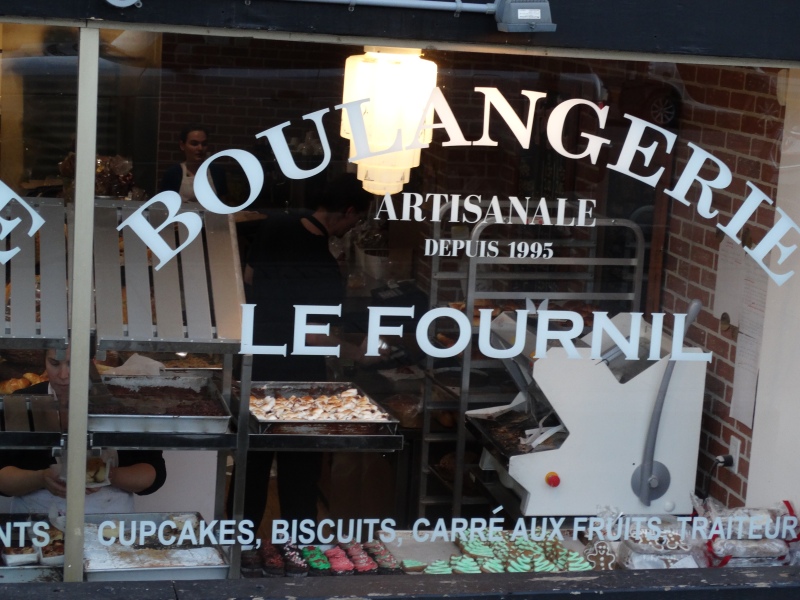 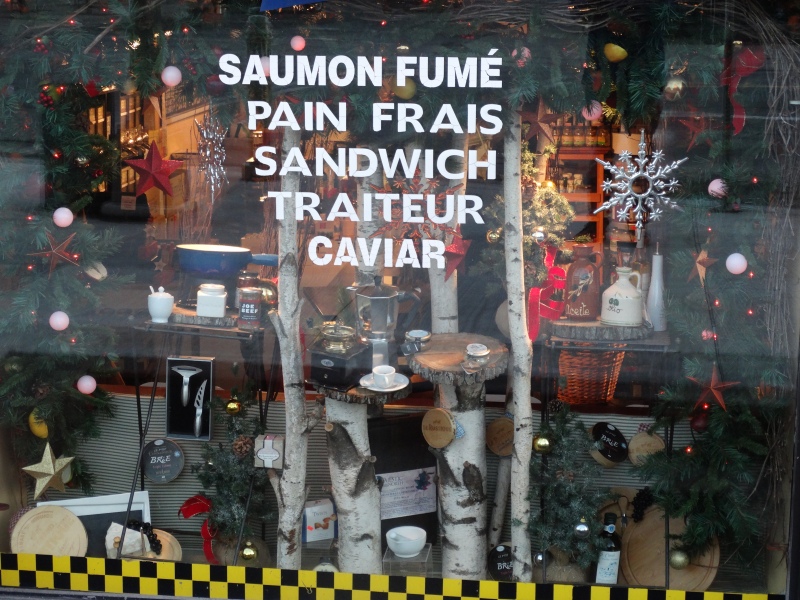 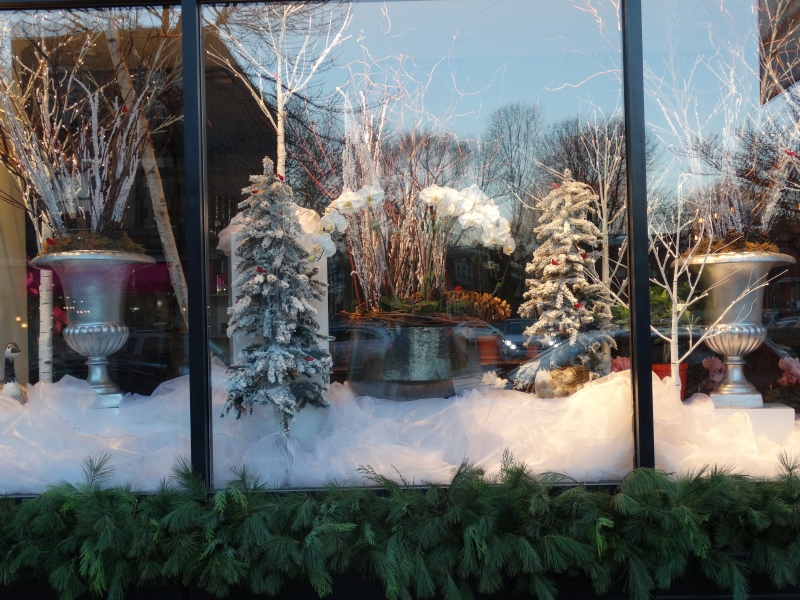 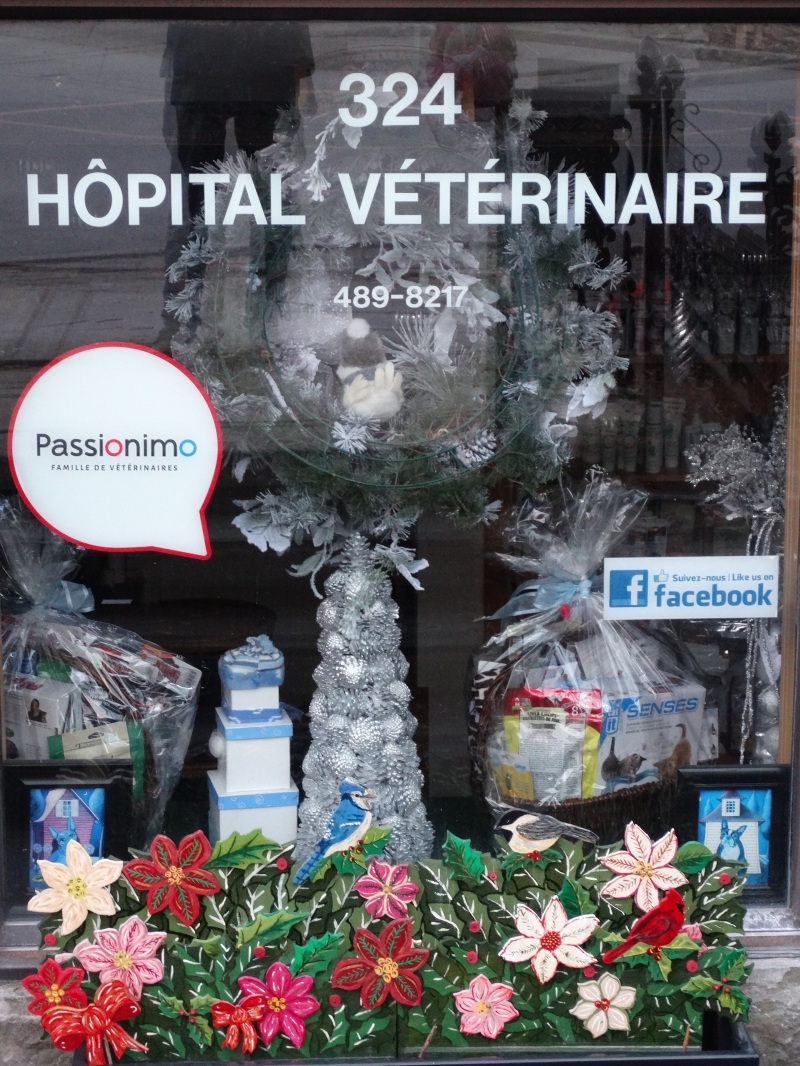 A view of Westmount Park – not a snowflake to be seen! 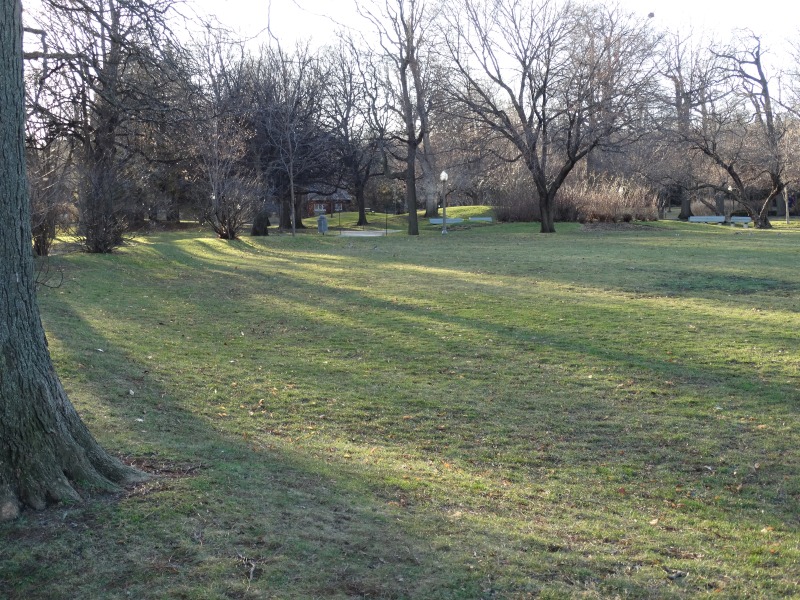 Christmas lights on the stair bannisters along Melville Avenue. 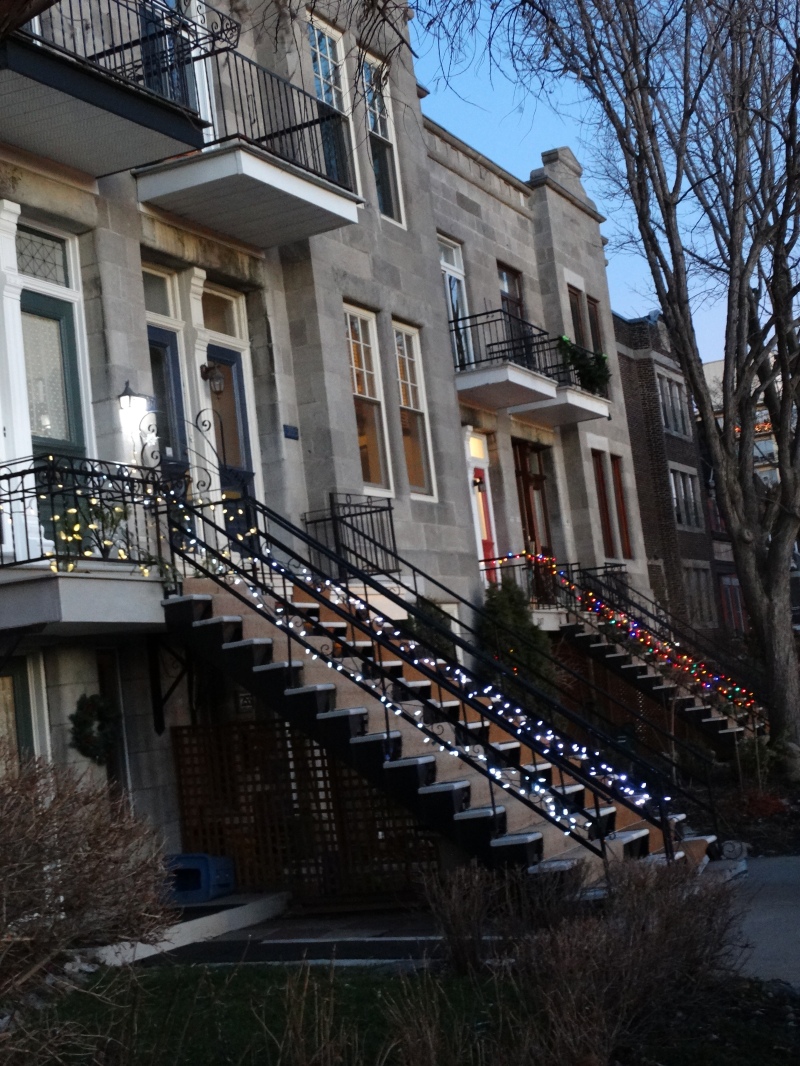 I am not certain how many feet Westmount’s border extends west on Claremont Avenue.

There is; however, an interesting apartment building on 418 Claremont Avenue facing this boundary.  It’s named “The Richelieu” – built in 1926 and designed by C. P. Tetley.

The stairs are made from Italian marble and their bannisters are solid mahogany. The  floors in the halls are covered with French ceramic tile.

More interestingly, is the original artwork (although deteriorating) in the halls and lobby.  One story relates to a tenant who, many years ago, faced financial difficulties and created the paintings in lieu of paying rent. 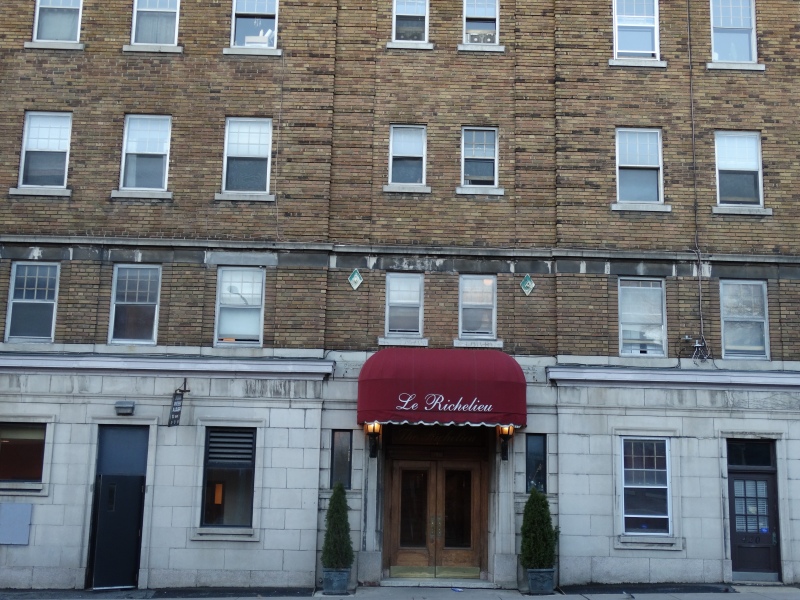 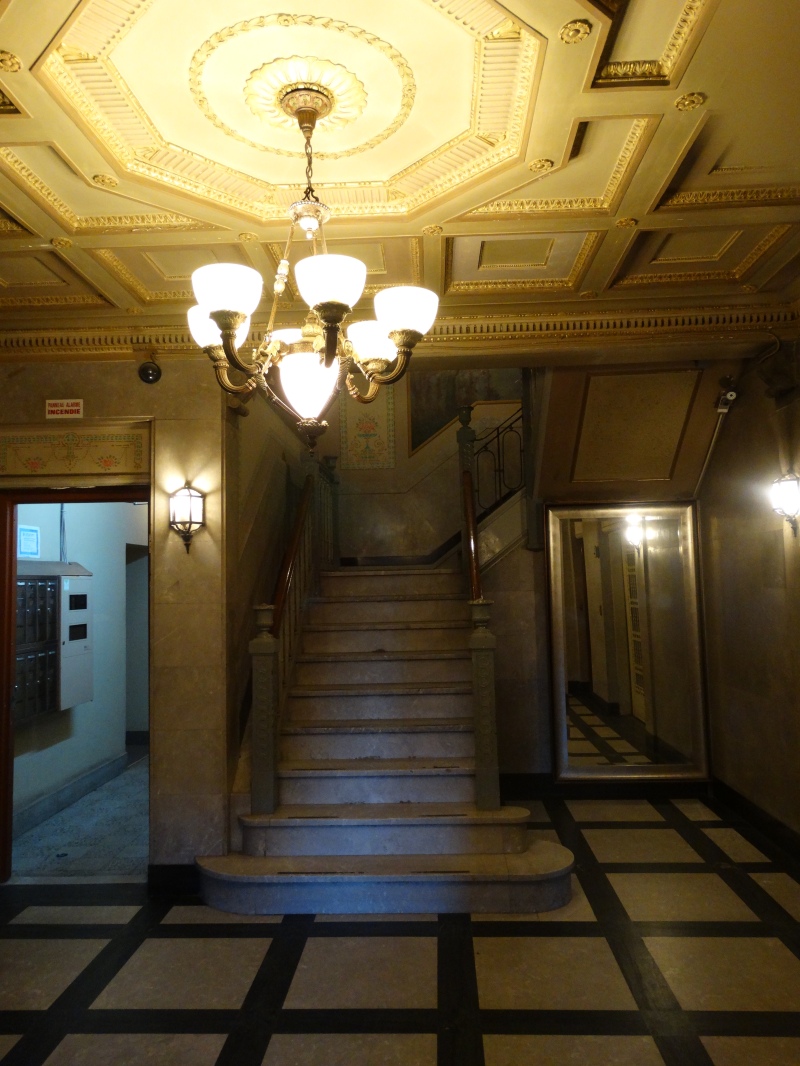 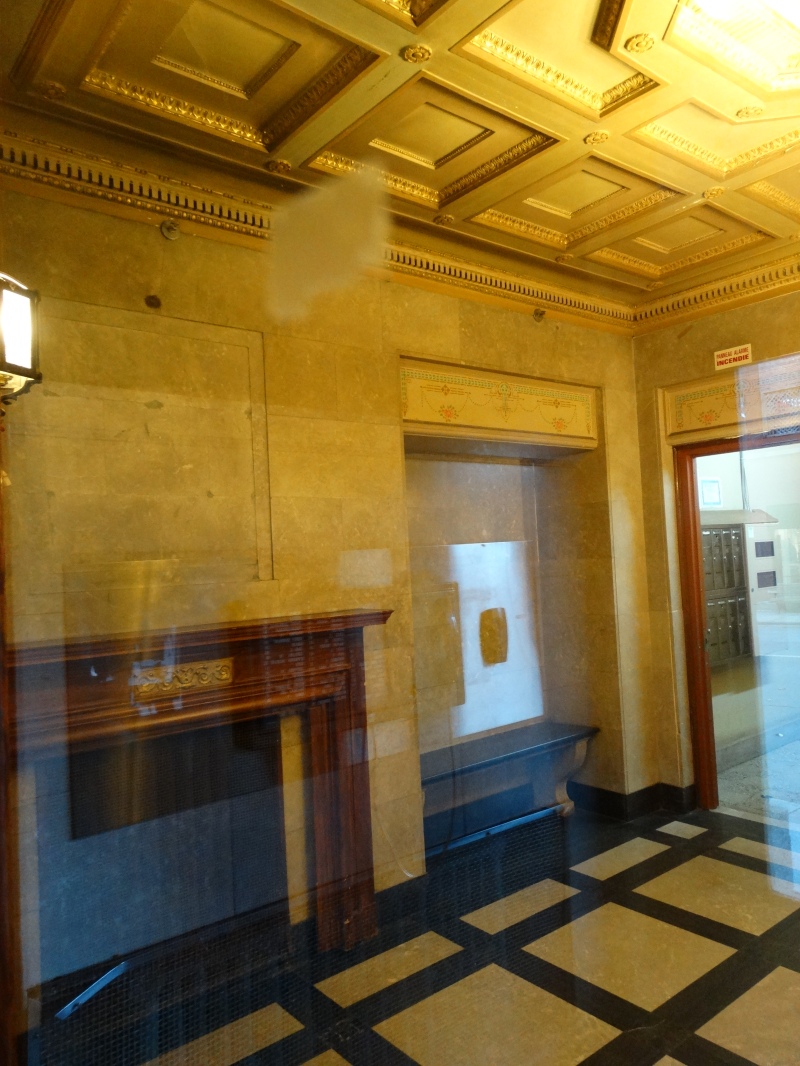 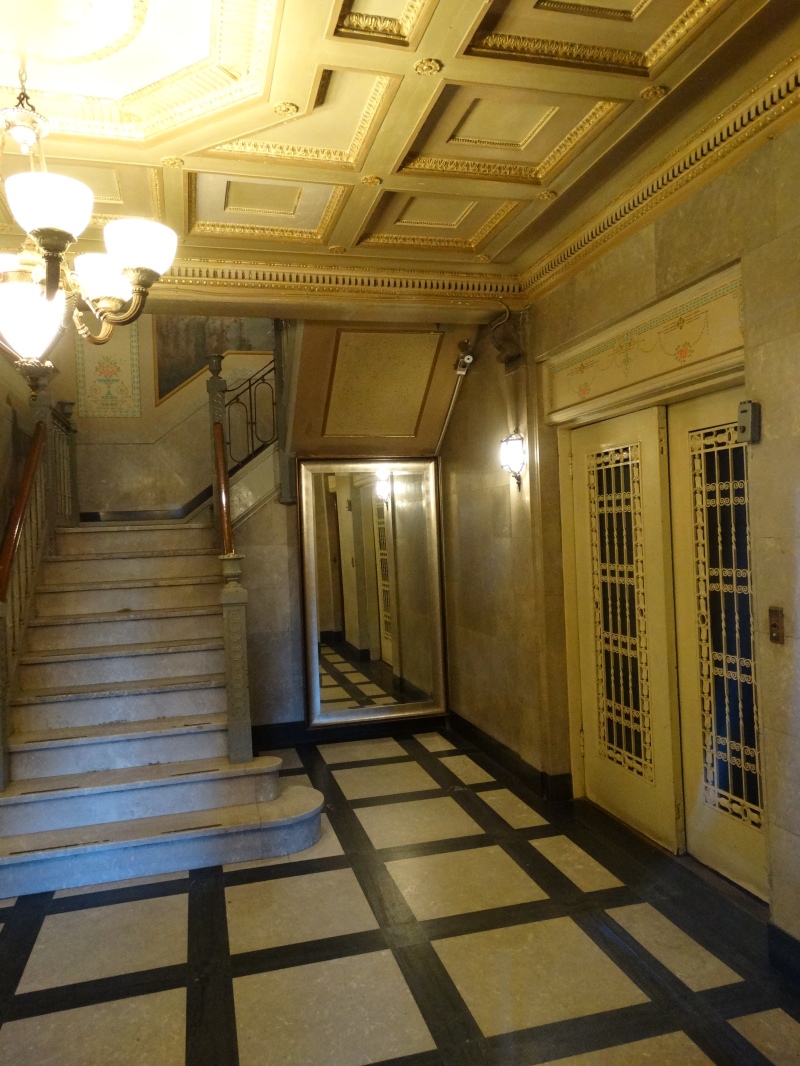 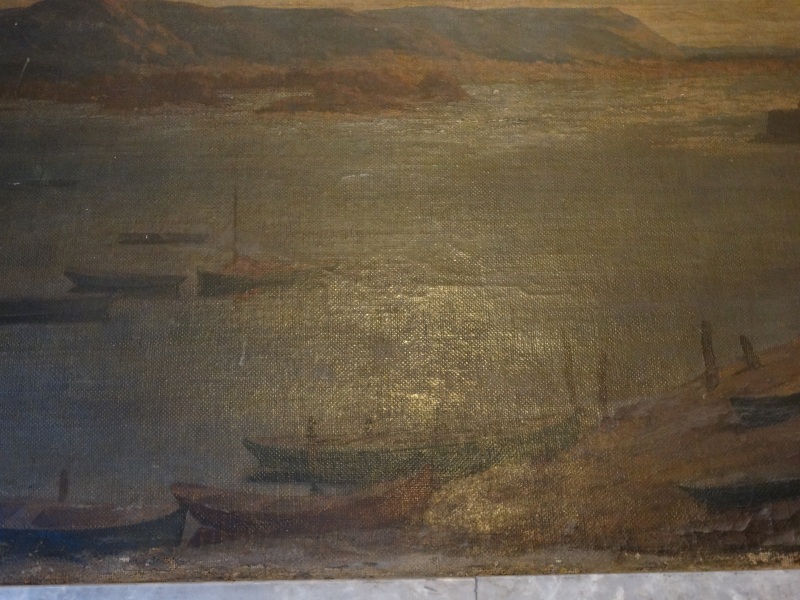 An evening walk through Westmount Park.  The park’s Norway Spruces and Lime trees made an interesting silhouette against the evening sky. 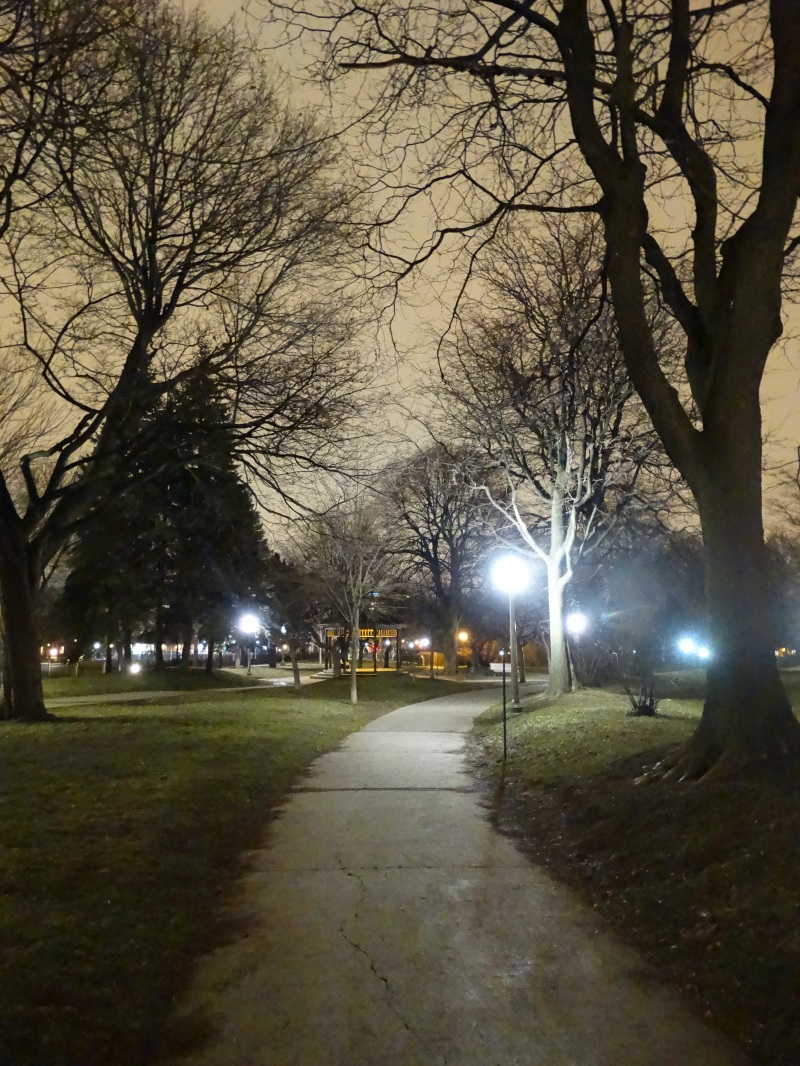