Westmount Park’s 41st. Family Day – I cannot believe how the time has past:  we have been attending these since 1988. The comforting routine of this annual even, basically unchanged over the years, always brings out the “child in us” – irrespective of age.  In fact, we have a drawer full of buttons that the City used to distribute to all of the children.  They were designed under the supervision of Beverley Adams. 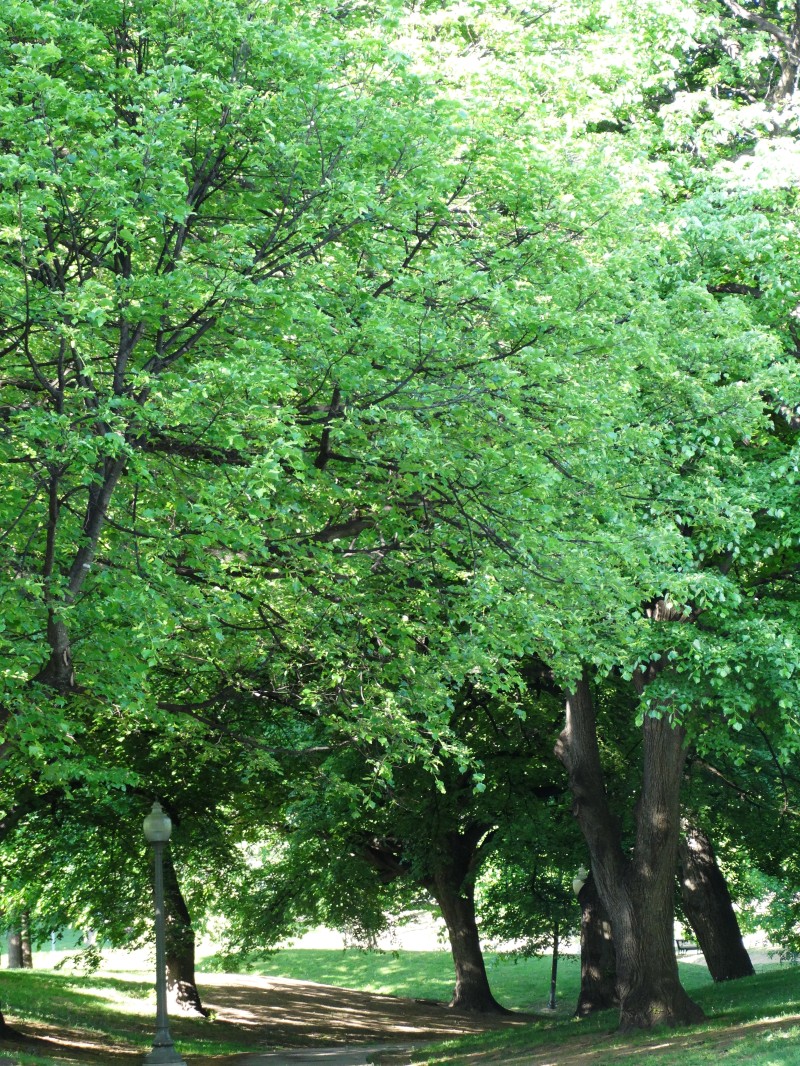 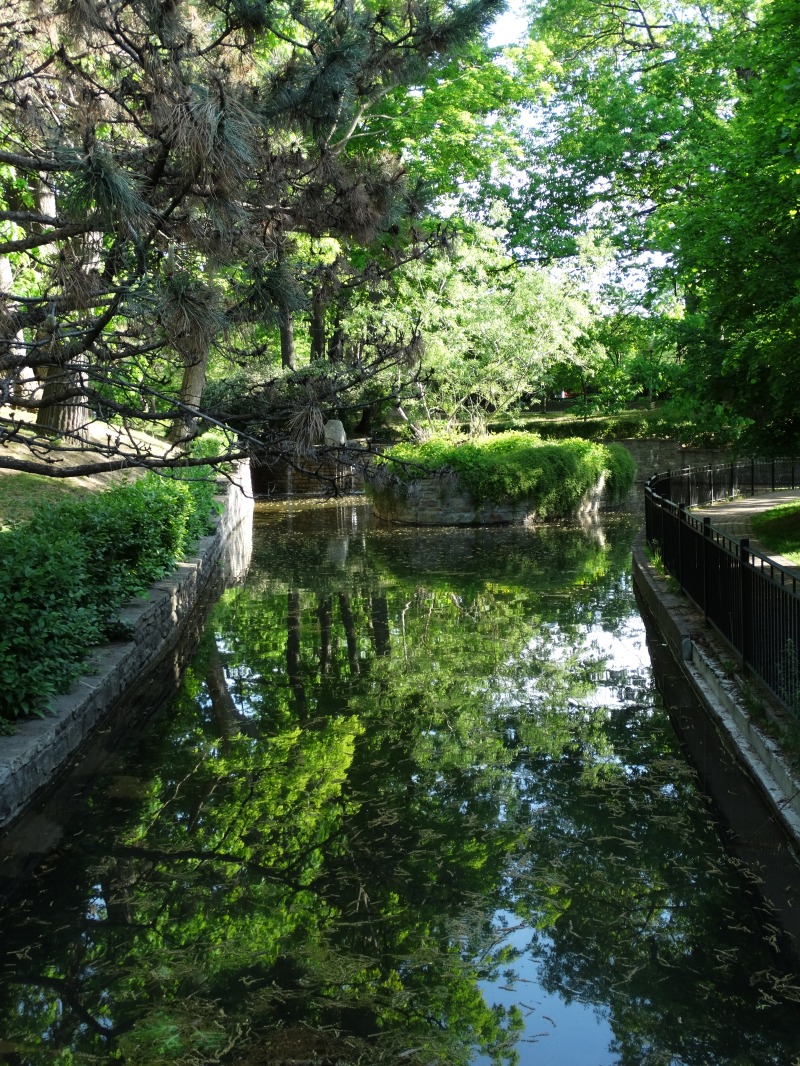 Did you enjoy Westmount Park’s unofficial “apple blossom festival”? Throughout the world, the arrival of spring is heralded by brilliant colour displays from blossoming trees.

In Japan’s Honshui Island’s Hirosaki Park, sakura (cherry blossoms) numbering in the millions bloom in early spring. In Washington warmer temperatures are marked with the blossoming of thousands of Yoshino (cherry) trees (given as a gift of friendship, in 1912, from Japan).

Westmount cannot compete with either location, but in our own small way, we did have a spectacular, head-turning, display of thousands of flowers, albeit for only two short weeks, from the park’s sweet crab apple (Malus coronaria) trees. During that time the park was ablaze with white and pinkish coloured blossoms that filled the air with a beautiful sweet fragrance.

Crab trees are native to Britain (originally introduced by the Romans) and are the ancestors of today’s cultivated (cultivar) apples. The tree’s name “crab” originates from the Norse word for scrubby: “skrab”.

The path from ancient crab trees to today’s domesticated apple cultivars is a fascinating story. (No it wasn’t solely “Johnny Appleseed” as we were taught in school).

The story starts with the Old Silk Roads – ancient trade routes from the Caspian Region (Black Sea) to Western China – established in the Neolithic (10,000 B.C.) period.

Trains of pack-animals would spread seeds from ingested fruit along the route causing new hybrids to develop from previously isolated species. The invention of grafting techniques (by either the Persians or Chinese) and used by the Greeks created new apple cultivars as described in the botanical works of Theophrastus (around 300 B.C.).

The Romans brought apple cultivars to Britain where they flourished and hybridized, amongst themselves, to such an extent, that by the nineteenth century every town and village in central and southern England could lay claim to a local apple.

Apples were introduced to North America by the colonists in the sixteenth century in the form of seeds (grafting was rarely practiced). In fact, entire apple orchards were started with seeds (pips) that allowed hybridization with local crab trees to produce new species of cultivars in a fashion described as a “vast experimental station”.

Next time you are walking through Westmount Park, where the paths are lined with crab apple trees – think back over seven centuries to Bartholomeus Anglicus who, in 1240, in one of the earliest botanical books describes “’Malus the Appyll tree” as containing “dyurs blossomes, and floures of swetnesse and Iykynge: with goode fruyte and noble… some beryth sourysh fruyte and harde, and some ryght soure and some ryght swete, with a good savoure and mery”.

A “picture perfect” summer-like Victoria Day Monday in Westmount Park.  The park was filled with people enjoying the warm weather.  The lagoon is filled – the Crab Apple trees and lilacs bushes are putting on a spectacular display of colours. 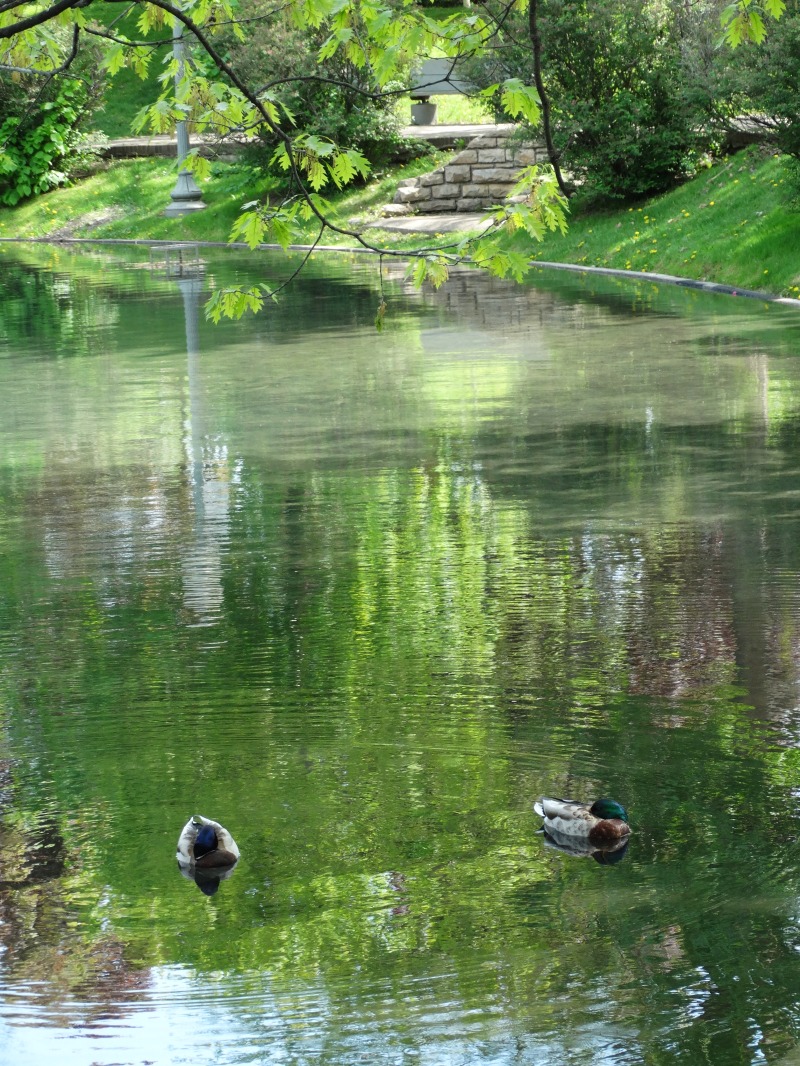 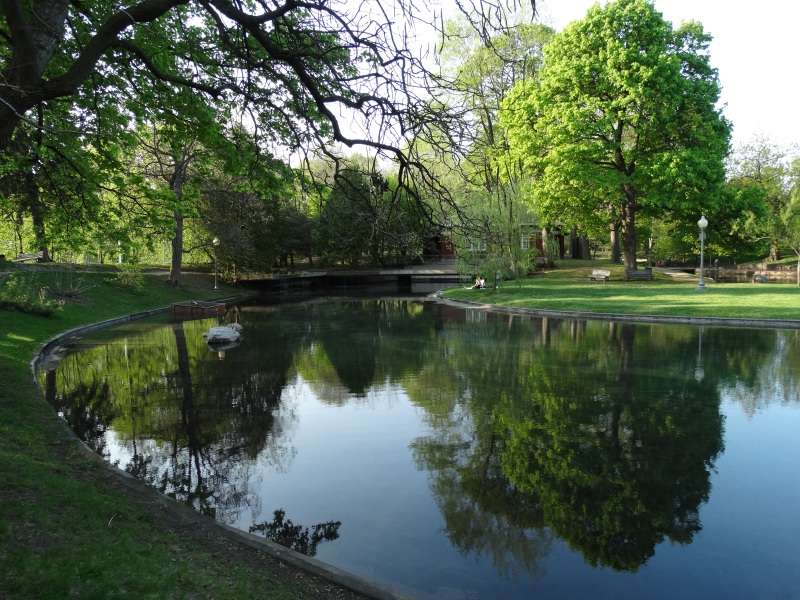 The park’s lagoon traces the course of the ancient Glen steam that runs south-west from the summit.  The stream still exists; however, it now flows underground – contained within conduits.

One of the truisms about living in a cold climate (including Westmount) is that the first signs of warmer weather involve preparations for the (much too short) summer season.

As an example, this evening the city started to fill the park’s lagoon with water. 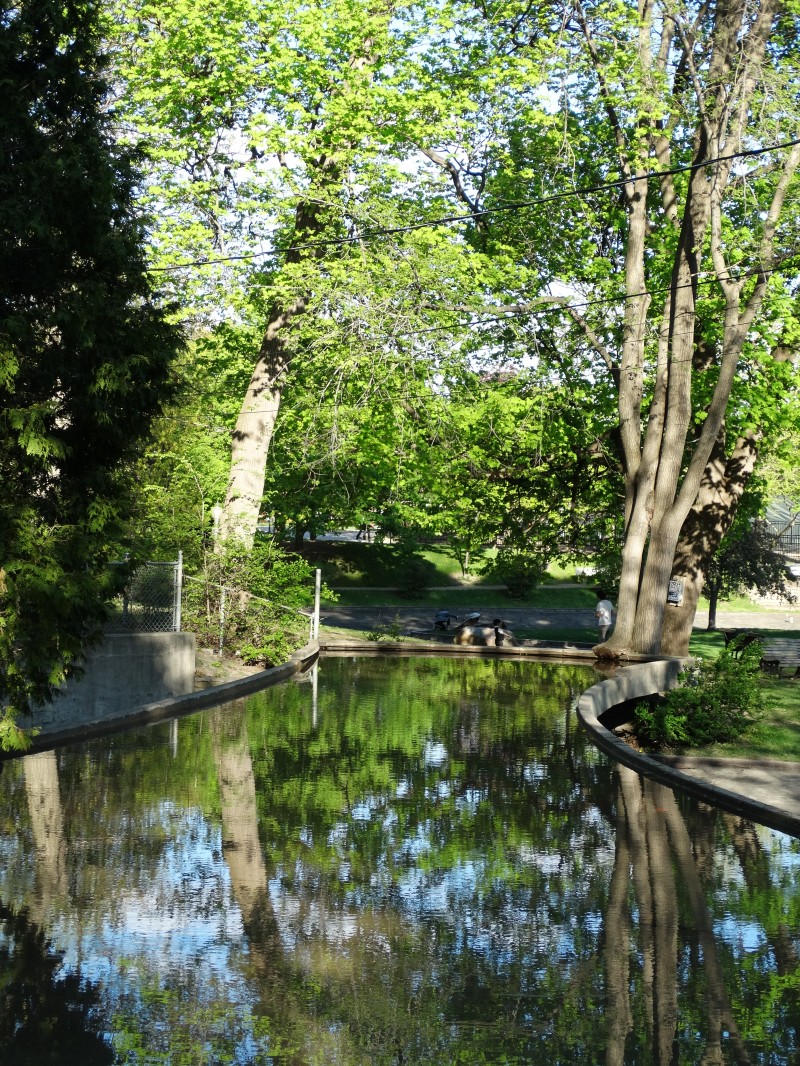 A (very) chilly mid-May – it tried to snow this morning!  In fact, it was colder today than it was on Christmas Eve.

There are those that are intrepid and try to make the “best of things” while sitting outdoors this evening.