I have always thought that the beautiful gardens, gracing Westmount’s homes result from a  collective residential civic pride.

One has to agree – we admired these blooms, this evening, while walking our dog along De Maisonneuve. 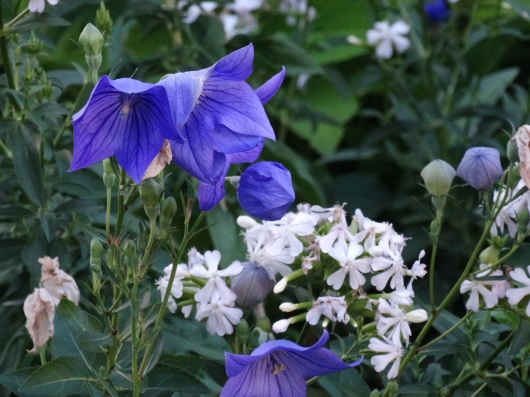 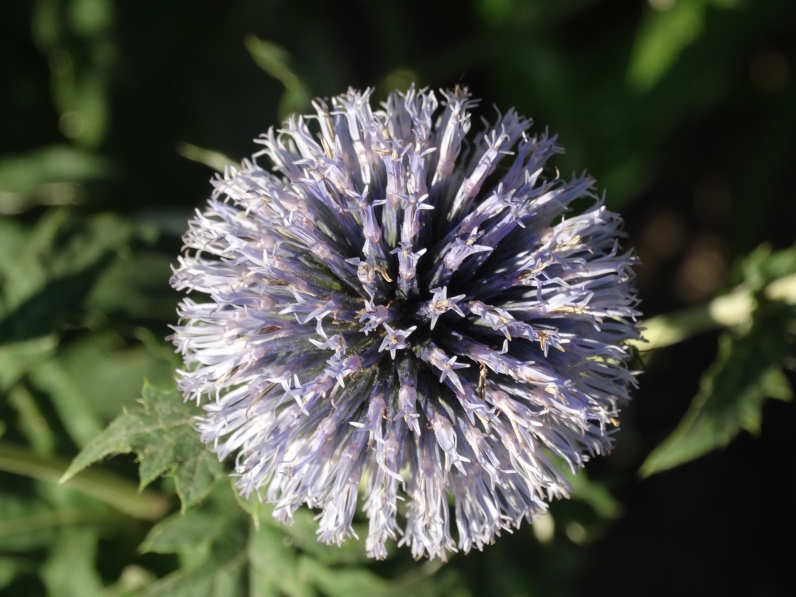 Relaxing in Westmount Park during a warm Sunday afternoon.

This article appeared in Westmount Magazine:

Did you know that the City of Westmount has its council minutes digitized and made available through its web site? It must have been a Herculean effort!

I was made aware of this, a few years ago, while researching an article with the assistance of Morgannis Graham, the former archivist for the City’s Archives and Records Management Department; however, I never spent the time to read their contents.

Finally, on a drizzly cold weekend, after walking our dog and doing the countless errands that constitute a weekend, I sat down in a comfortable chair and starting reading the council minutes starting with the year 1882.

The first thing that strikes you is that, prior to 1908, council minutes were transcribed in beautiful longhand (today, almost a lost art) using a fountain pen – evidenced by the occasional ink spots created as the instrument was shaken to push more ink into the nib.

It also appears that council meetings, at that time, were “closed door” affairs – specifically, citizens’ questions were received in writing. (Much different from today’s two separate question periods held during each session).

Issues debated and discussed included: macadamizing of roads, the replacement of wooden sidewalks with concrete, the laying of sewers and the installation of a water filtration unit to prevent typhoid outbreaks. (At the time the Town had its own Health Department that was tasked to control contagious diseases.)

Other issues were the opening of streets, the extension of existing streets, naming or renaming them at the request of their proprietors, the drainage of Western Avenue and the sharing of Bell Telephone lines.

Then there were the financial reports – their level of detail gives an entire new meaning to the word “transparency”! Every penny was accounted for (of course by long hand arithmetic) and shown how each expenditure added value to the Town. In fact, some minutes include the tape, from the adding machine, that confirms the expenditures.

Interestingly, the Park’s Department financial figures showed a Head Gardener on salary (in fact, the Town built the current greenhouse “suitable for the park’s Head Gardener”), as well as a Park Superintendent, a park watchman, labourers, and a horse with equipment to roll (seriously!) the park’s grass!

On another note, a touching story tells of a Town employee that had recently died – council remembered that, during his employment, he always sent a portion of his salary to the “old country”. As such, the council agreed that all monies owed to his estate should be sent directly to his family in Ireland.

During World War One, casualty lists were read and letters of condolence sent to the families.

In short, these minutes reflect how the Town of Westmount, step by careful step, built what is now known as the City of Westmount. I would encourage everyone to read (or at least browse) these council minutes – and appreciate the tremendous work involved to create today’s City of Westmount.

What follows is a sampling of the Town’s council minutes – although some early entries, in today’s context, might appear amusing – perhaps the proper word is “decorous” – either way, it properly reflects the Town’s early rural nature.

14 August 1882
A letter dated  7 August from Isaac Newton Tufkes was sent to the Council complaining of the nuisance arising from a bull being frequently placed for serving cows in close proximity to his dwelling and stigmatizing the same as offensive and immoral in its tendency as well as dangerous to little children. After some discussion it was moved by Mr. Duff, seconded by Mr. Jellyman…

Resolved that the Sec. Treasurer be requested to submit to next meeting of the Council the draught of a by-law preventing bulls from being in a public shed or in any enclosed part the municipality and requesting the owner of any bull kept for serving cows other than his own to a use covered building for the purpose.

3 July 1883
The Secretary Treasurer then read a communication from the City of Montreal enquiring if this Corporation was prepared to consider the question of annexation to the City. After discussion the Secretary Treasurer was ordered to inform the said City of Montreal that this Council was not prepared to take any action in the matter at present.

5 May 1884
It was thereupon unanimously resolved that the name of Sissons Lane be changed to that of St. Catherine Street West, that the avenue to the road leading from St. Antoine St. to the Cote St. Antoine Toll Bar at the corner of Cote St. Antoine Road be called for the future Greene Avenue.

7 July 1884
At the suggestion of Councilor… it was ordered that the by-law forbidding the grazing of cattle on the highways of the municipality be strictly enforced.

A petition signed by… and others was read stating that the petitioners believed a piggery was about to be established in the municipality and praying the Council to enact a by-law comprehensive enough to prevent all permissions.

7 January 1889
…served a protest on Cote St Antoine Road Company calling upon the said Company to the immediate repair of the bridge on Western Avenue between Metcalfe and Landsdowne Avenues.

2 September 1889
…Mr. Wright has placed in his hands for sale 2000 dollars of Western Avenue bands and which he would like to dispose of to this Corporation.

No action was taken in this particular, but it brought up the question as to the probable terms upon which the Corporation could acquire a title to Western Avenue and the Secretary was instructed to send a written enquiry to the President of the Cote St Antoine Road Company asking upon which terms the Company would be willing to cede to the Corporation Western Avenue.

7 July 1890
The Town’s list of water supply, tested by the Heath Department, included:
Spring on east side of Landsdowne
Spring in cellar Bulmer’s house
Spring in gully south of Western Avenue, well on west side Victoria Avenue, well on Mountain Ave (Mrs. Barr)
Well on property of James MacFarlane.

3 February 1902
…that the Council authorize the purchase of gold pendants for presentation to four Westmount soldiers returned from South Africa..

A quick search found one for sale at eMedals that belonged to Burnett K. Snider. The reverse side reads: “Presented by the town of Westmount to Burnett K. Snider as a recognition of his services to Queen and Empire in South Africa”. (In case you are wondering, the price was listed at $1,950 USD).

From the Council minutes (7 November 1902):
There having been submitted letters from Reginald Matley and Burnett K. Snider, who served with the 10th Canadian Field Hospital in South Africa, applying for gold pendants granted by the Corporation to Westmount men who say service during the South African Campaign.

From the Council minutes (16 February 1903):
Councilor Borland reported that in accordance with instruction of Council by resolution of 7th November 1902, he had arranged for the presentation of gold pendants granted by the Corporation to those of the citizens who had served with His Majesty’s military forces in South Africa 1897-1902.

Fourteen citizens had been found to be entitled to receive such pendants.

It was further reported that Lord Dundonald, General Officer Commanding the Canadian Militia had consented to make the presentation on the occasion of a concert to be given by the Westmount Cadets in Victoria Hall on the date mentioned.

23 June 1902
It was resolved to proclaim a public holiday on the occasion of His Majesty King Edward VII on Thursday, 26th June instant and to otherwise mark the event by the planting of a tree in Westmount Park.

16 February 1903
Submitted and read letter dated 14th February from John James Browne and Son, real estate agents, enclosing a petition from seven proprietors of land on High Street asking that the name of said street be changed to Holten Avenue.

18 May 1903
There was submitted and read a letter from Mayor Cross date 24th April reporting that he had instructed the Town Solicitor to proceed to Quebec for the purpose of opposing a Bill which would authorize the establishment of an abattoir in Westmount….

18 May 1903
The Supt. Of Works having reported that necessity of partly re-building the bath in the Park was request to prepare an estimate of the work required and report to the Finance Committee.

3 July 1905
A protest dated 17th May 1905 signed by… and other residents on Mt. Pleasant Avenue again the conversion of a building No. 416 Mt. Pleasant Ave. into a stable was read and referred to the Engineer with instructions to ascertain that the Town by-laws are not infringed by the proposed alteration.

3 February 1908
Consideration of the annexation of part of Notre Dame de Grace as provided by By-Law 178 was received and there was presented to Council by Mr. W.D. Lighthall K.C. a petition signed by a number of proprietors requesting in view of the prevalent opinion being that the sentiment of the Town is favourable to the principle of such annexation – that the Council review proceedings to that end keeping the question free from confusion with other issues.

That By-law No. 178 having for its object the annexation of a part of the territory of Notre Dame de Grace be and is thereby declared effective with regard to the properties therein described, the owners of which have signified their consent to such annexation, namely of all the shaded lots and parcels of land indicated upon a certain plan herewith deposited to from part of the archives of the Town, prepared by J. P. B. Casgrain on the 10th December 1907 and bearing the title “Plan of part of Notre Dame de Grace to be annexed to the Town of Westmount” and all the streets and lanes shown on said plan with the exception of Cote St. Luc Road and Notre Dame de Grace Road, the upper Lachine Roads and Western Ave. which belong to the Turnpike Trust and are not covered by the consent given by the Council of Notre Dame de Graces.

14 March 1908
Submitted and read letter dated 19 February 1908 from the Sec. Treasurer of Notre Dame de Graces communicating a resolution adopted that day the Council refusing its sanction of By-law 178 re annexation and repealing its previous resolution approving thereof.

2 August 1909
That the Council decline the offer of Mr. C. A. Workman of a young jaguar for the reason that is considered undesirable to add to the number of animals in the Park without more suitable accommodation than is presently available.

And so this issue still goes…

Another evening walk through the Park – one has to appreciate the thought and planning, over a century ago, in creating this area. 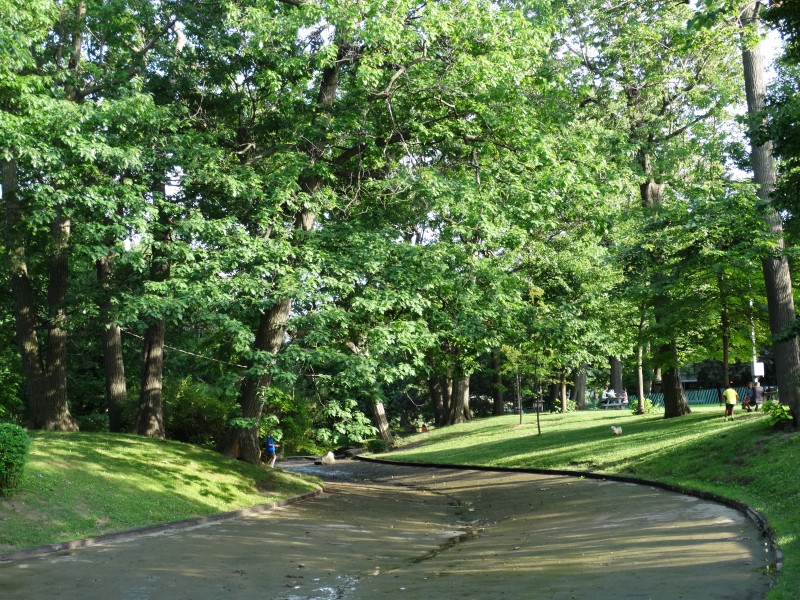 A Saturday evening walk, through the park, after today’s rain (finally) stopped. 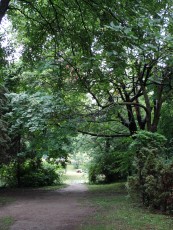 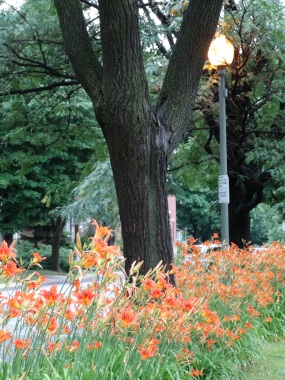 Summer flowers, in full bloom, on Melville Avenue and Metcalfe. 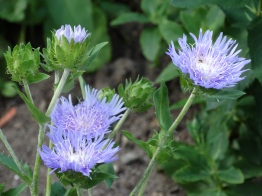 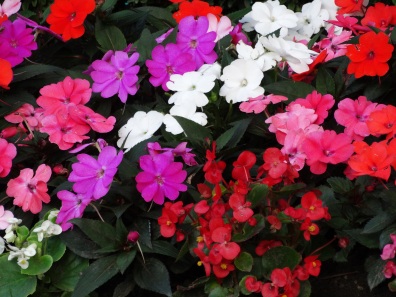 The area next to the park’s new Cornilleau outdoor ping-pong table is a perfect area to spot birds. This  time of year also  offers a variety plants in full bloom – one simply needs to disconnect from  our social media devices and look! 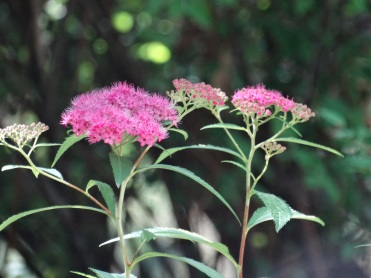 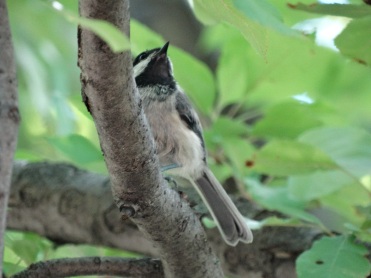 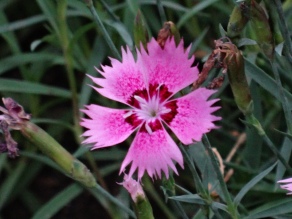 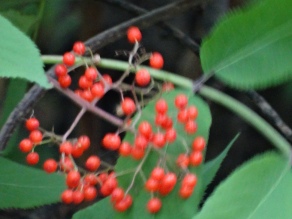