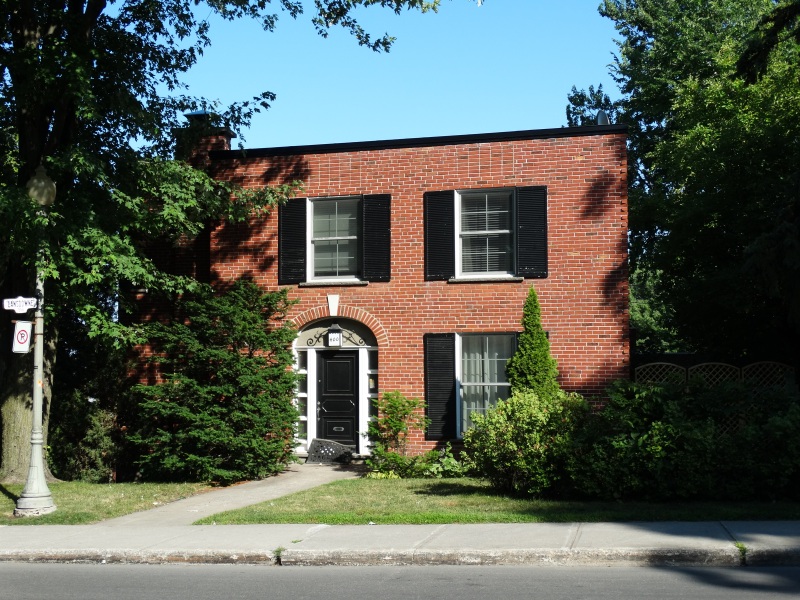 William Greig, manager Warden King & Son (1897). The original residence has been demolished and rebuilt; however, the history of the original building owner’s professional relationship is very interesting.

“Warden King was 29 years old when, in 1852, he read in the Montreal Transcript and Commercial Advertiser an ad that said, “By auction ‘he whole of the St. Mary Foundry tools and stock will be sold on the 30th June . . . the whole of the stock-in-trade of the above establishment . . . And, immediately after the above Sale, will be Sold a lease of the foundry and shops, for the Term of Three or Five years.”

St. Mary’s foundry in old Montreal Warden King and his friend George Rogers, a foreman at the St. Mary Foundry, decided to seize the opportunity. Six weeks later the firm of Rogers and King was born.

In 1855, as the lease to the foundry was running out, Warden King purchased building lots for 100 pounds in the “St. Lawrence suburb”.

This modest advertisement appeared in the Montreal Directory of 1856-57: “Rogers & King have Removed Their Foundry to No. 85 Craig Street Where All Kinds of Castings are done At Reasonable Prices.”

Rogers & King began experimenting in boilers. By 1866, with the help of one of their employees, Archibald Spence, they were ready to market their first hot water heater, the Beehive. This was followed by the Gem and, in 1874, Spence’s Hot Water Boiler. The Warden King slogan, “The Grand Old Name In Heating”, was inspired by these years of pioneering.

In 1870 George Rogers retired and sold out his Interest in the business. The name Rogers & King survived until 1887 when it was changed to Warden King. At about that time Mr. King’s young son, James Cochrane King, went into the foundry to learn the moulder’s craft, as his father had done before him.

Warden King successfully weathered the economic storms of the time, and 1886 marks a memorable date in their story: a new domestic boiler was patented, the “Daisy”.

Thousands were thus introduced to the comforts of central heating. The advertising was calculated to allay the fears of those to whom the word boiler meant a threat. “Hot water is the only absolutely safe system,” they announced, “it is as harmless as the tea kettle on the kitchen stove.”

By 1904, thousands of “Daisies” were in use in Canada, the United States, Great Britain, Germany, France, Australia, and South Africa.

More than 45,000 of these boilers, some converted to oil, still give dependable service today.