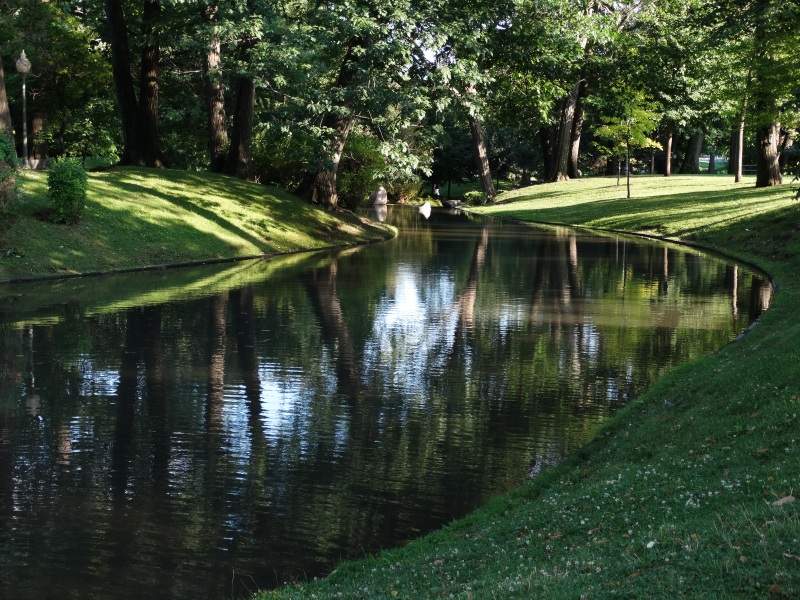 The park’s lagoon early in the evening.

These lagoons are the “remnants” of the Glen Stream that used to run flow through this area. The various tributaries of the stream were buried, years ago, and diverted into conduits to allow for residential development.

I have seen City workers use metal stair steps to enter a deep manhole, near the public library, to adjust a valve that controls the volume of water that enters these lagoons. I am not sure if it is from a municipal water source for from the original stream. (I should have asked!)

Today, the stream runs underground south, through the park, towards Lansdowne Avenue and Saint Catherine Street, then under the arched Canadian Pacific Railway (CPR) railroad bridge, towards Saint Henri.

Apparently, there is a sewer cover in the middle of Lansdowne Avenue and Saint Catherine, in front of the CPR railway arch, where one can still hear the rushing waters of this stream.

(One would have to take their own “lives into their hands” to verify this!)

I recently came across the term “daylighting” that refers to resurrecting former urban streams. One can only imagine “daylighting” the Glen Stream, it is not such a “crazy idea” – it has occurred successfully elsewhere.

“There was Islais Creek, running where Balboa High School is now,” said Sherk. “All of a sudden it made sense: the school’s cafeteria had been flooding and the basements of homes in this neighborhood flood during heavy rains because they’re in this large watershed.”

Two wells have been drilled on the school campuses since Sherk’s discovery a decade ago, tapping the hidden creek’s water to irrigate community gardens, parks and street vegetation, while hopefully reducing the threat of floods.

Now, as part of an estimated $4 billion sewer upgrade, Islais Creek and other streams that last saw daylight more than a century ago could flow openly once again through neighborhoods of one of the country’s most densely built cities.

Such “daylighting” of urban creeks is being embraced in cities throughout the world. Seattle, Portland, Ore., Yonkers, N.Y., Providence, R.I., as well as Zurich are among many places reopening long hidden waterways. Resurrecting old creeks can help remove hundreds of millions of gallons of storm water from sewer systems each year — meaning fewer sewage spills and cleaner water.

Covered up during and after the Gold Rush when the city’s booming population created demand for housing, San Francisco’s many creeks were diverted and sent underground into the sewer system — parts of it still utilizing 1850s-era brick pipes. The water is mixed with the waste and sent to a treatment plant before being expelled into San Francisco Bay or the Pacific Ocean.

Each year, these rain-swollen creeks often overload the system — and about a dozen times a year raw or partially treated sewage spews into the bay and sea.

Currently, Islais Creek, once the city’s largest, can only be seen in a park in the southern part of the city, where it flows into concrete sewer pipes.

The only place people can catch a glimpse of Mission Creek is in the basement of the San Francisco National Guard Armory and Arsenal building, a massive brick structure not open to the public and currently owned by a pornography film company.

“We want to partially restore the natural hydrology of San Francisco,” said Tyrone Jue, spokesman for San Francisco’s Public Utilities Commission, the agency in charge of the project. “It helps the sewer system by reducing flow, beautifies neighborhoods and can bring back natural wildlife that may once have lived in an area.”

San Francisco is studying the best sites for unearthing these historic creeks, and officials say the first phase of projects would likely start in five to 10 years.

Islais Creek, which starts in the city’s Glen Park neighborhood, and Mission Creek, which runs beneath the trendy Mission and South of Market districts, are likely the first candidates.

Both creeks flow toward the bay through densely packed neighborhoods, which could expose the water to pollutants such as auto runoff and garbage.

Berkeley in the 1980s opened a stretch of Strawberry Creek in a public park. But after heavy rains the creek filled with a lot of debris.

“Growing plants and vegetation along the creek banks can be very efficient in filtering pollutants and making sure the water going into the bay is better quality,” said David Smith, manager of Clean Water Act permits for the U.S. Environmental Protection Agency office in San Francisco. “There’s a lot of environmental benefit in turning streams back into living systems.”

Seattle has many urban creeks, most of which have had some sections reopened or restored in recent decades.

Yet the process has been vexing at times, and full of challenges, Noble said. Some creeks have become healthy habitat for spawning salmon and other wildlife, yet other creeks have been polluted from urban runoff, increasing fish deaths. Federal fisheries managers are studying the fish deaths, Noble said, trying to figure out the toxins responsible.

“Our story is both positive and puzzling,” she said. “Daylighting is an admirable venture, but it can also get very complicated very quickly.”

Though San Francisco city creeks will never flow as they once did, those working to expose them see benefits for the city and its residents.

“It turns a negative in terms of flooding and property damage into a positive,” said Sherk. “The community can use the water for irrigation, help mitigate flooding, improve the environment and have an educational resource for the schools.””

This entry was posted in Uncategorized and tagged Quebec, Westmount Park. Bookmark the permalink.