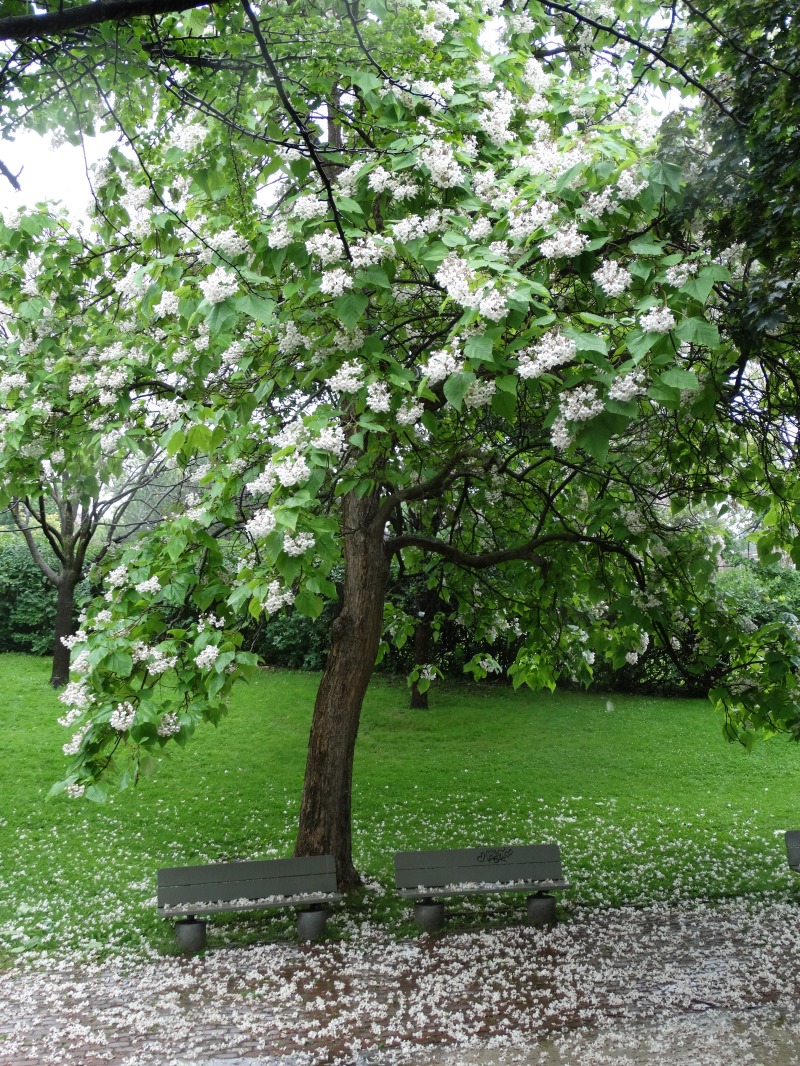 A version of this article appeared in the Westmount Independent, September 8, 2015

As a young child one of my first books were the “Dick and Jane” series.

One particular story described a cottage that was covered with red and orange nasturtiums so vividly coloured that villagers summoned their fire department thinking there was a fire!

Westmount Park would be the perfect location for a continuation of that series – I have noticed many people stopped in fascination by what looked like a blanket of snow, in the middle of June, covering the park’s lawns and portions of the lagoon.

Closely examining a single blossom leaves one amazed at their beauty. Each flower resembles a white orchid with ruffled edges. Their interiors are lined with purple and maroon dots as well as lines interspersed with yellow streaking.

The word “Catalpa” (a misspelling of “Catawba”) originates from the Catawba Indians’ ancestral lands along the Catawba River in North Carolina. The trees are native to western Georgia, western Florida, Alabama and eastern Mississippi.

The tree was first described by Mark Catesby in 1726 during an expedition from England to document the New World’s flora and fauna.

The trees bloom mid to late June with large clusters of flowers. Each cluster contains a total of twenty-seven flowers from a common stem (inflorescence). Each inflorescence blossoms from 5-6 days. The entire tree blossoms for 8-12 days.

The flowers develop into fruit resembling long bean pods filled with seeds that remain on the tree throughout the winter.

Fisherman have valued the tree as a source of worms for the past 140 years. Specifically, larva of the Catalpa Sphinx (sphinx moth) only feeds on Catalpa leaves and are prized as fish bait.

Finally, appreciating the true beauty of these trees in Westmount Park demonstrates that certain things we regard as “commonplace” are really truly exotic!

This entry was posted in Uncategorized and tagged Quebec, Westmount, Westmount Park. Bookmark the permalink.