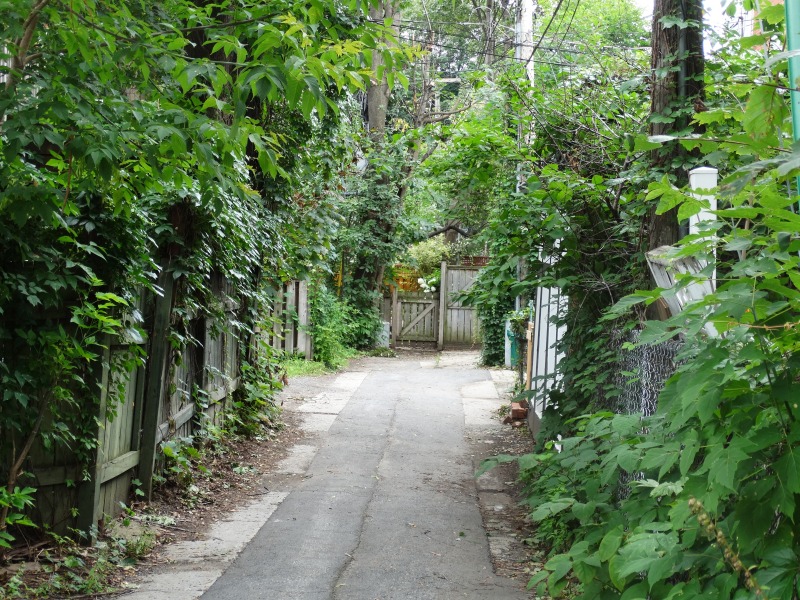 A version of this article appeared in Westmount Magazine:

“Nothing will make you feel more like a true insider than turning the corner of a perfectly average street and finding yourself in a hidden garden lane. – Fodor’s Travel, 2007”

“This is lost land – the last known deed was dated 1933 and the owner cannot be located.” Those were the comments from our notary as she put her office seal on our newly-minted Certificate of Location as we were finalizing the purchase of our Westmount home.

The “lost land” she was referring to was a seven-foot wide, unpaved lane that intersects a dead-end street next to our house, running about half the length of a city block. It’s an area where tree seeds have germinated into saplings and wild plants co-mingle with flowers seeded from former gardens outside the confines of traditional landscaping. That was our first introduction to Westmount’s lanes.

Shortly after moving in, a large dog became part of our family; being our first dog, I quickly learned that they need to be walked – a lot! Westmount’s lanes became the perfect areas for our long walks. It is not uncommon to stroll for nearly an hour and not encounter a single soul. Aside from the modern asphalt paving, these are areas where time seems to stand still.

Originally, these lanes had several uses. They were former delivery areas for coal and ice, in fact disused coal chutes and ice delivery doors are still evident along the sides of many buildings. They were also back entrances to houses as evidenced by crumbling stairs leading to back doors that haven’t been opened in decades.

In addition, they were used as pathways for horses; one can still see former 19th-century coach houses along their paths.

For example, the lanes off Stayner have several former coach houses that are currently used as either garages or accommodation. Today, they are a quiet refuge from modern traffic. A place where butterflies, birds and a host of insects make their home among the choke cherry bushes, wild grapes and crabapples that line their paths.

There are several lanes that one can discover in Westmount. One won’t find them on any city maps. A few have names: the lane running parallel to the CPR tracks off Abbott is called Riverview. The lane joining Clarke and Greene has a sign with the words Love Lane.

Some lanes are all that is left from former manufacturing enterprises. For example, a former service lane north of de Maisonneuve that joins Metcalfe and Melville was used, in the 1920s, by the Canada Bread Company Ltd, now part of Mexico’s Grupo Bimbo, S.A.B. de C.V, when their plant was located at 315 Melville, formerly named Elgin.

The well-known Arlington lane running north from Sherbrooke was a portion of a former First-Nations’ path originating at Bethune, traversing west through the park, going north between what is now Belmont and Lansdowne, and ending on the mountain.

Arlington Lane has been described as a place where one can see “Westmount’s tidy back yards, in particular, a house with a wrought-iron gate and flower-filled gargoyles.” Sadly, that house no longer has its charming features. There are, however, beautiful old glass block windows as well as old garage doors off Ingleside lane that still have their original antique brass hardware.

Finally, it’s a comforting thought that there are still places where one can wander through timeless paths and reflect that what is observed was formerly unknown except to you! This is the gift the lanes impart to one’s body and soul by appreciating all that Westmount’s Terra incognita have to offer.